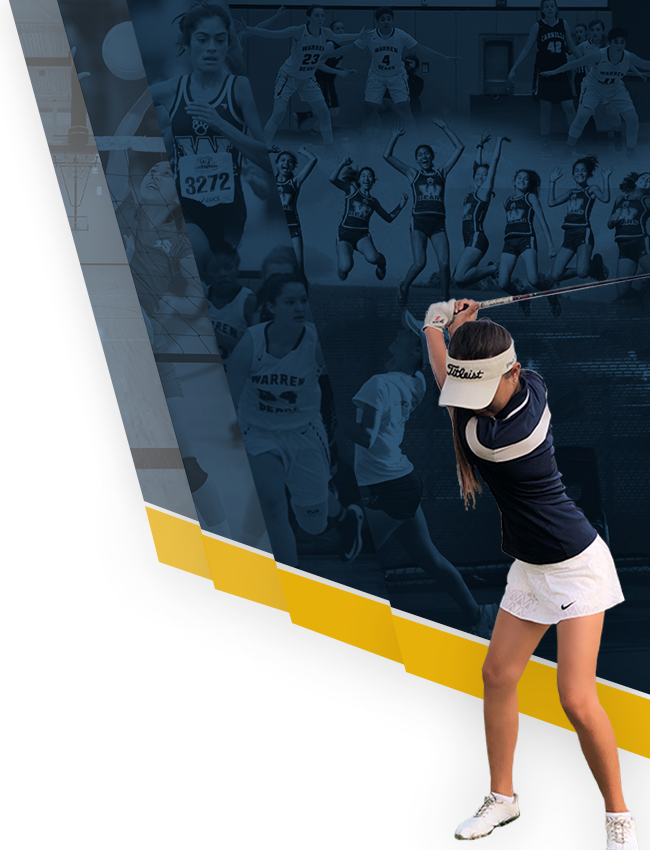 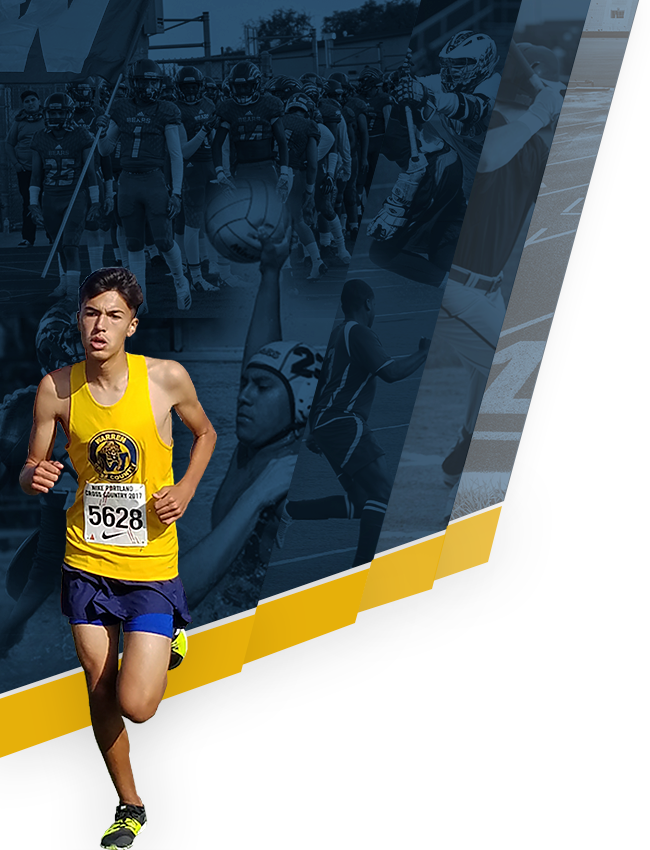 As the spring sports swing into action, let’s take a look at the winter wrap!

Our Boys’ Basketball team followed their 2019 League Championship season with another strong performance. Although the Bears did not defend their title, they finished 3rd in a very competitive San Gabriel Valley League (falling only to Lynwood and Dominguez). The Bears seemed to be the team that everybody loved to hate; every opponent brought their best game when taking on our boys. This newly adorned target on our backs served as a catalyst for our coaches and athletes to elevate their game. Arguably the best testament to this enhanced level of play took place in our 1st round CIF game, when Warren traveled to Oak Park to take on a very talented team who boasted a record of 26-2 going into the playoffs.  The Oak Park team had phenomenal guard play, tremendous outside shooting, and formidable bigs who posed a challenging inside presence. On paper, this game could have been a blowout; however, the Bears did not go away without a courageous and relentless fight. Never was I more proud than watching our boys in this final game of the season. For many, this was the final game of their careers, as this 2019-2020 roster housed 10 seniors. The game was a high-scoring affair, and it was a nail-biter throughout. The Bears were up 20-18 at the end of the 1st, but Oak Park came thundering back to reclaim the lead–43-40 at the half. The game was tied 59-59 at the end of the 3rd, and the intensity and excitement simply continued to build. A 76-76 finish sent the game into a thrilling overtime battle. The Oak Park point guard drained a very well-defended 3 with less than :05 on the clock. The Bears quickly inbound to Jahvy Medearis (signed with Cal State Bakersfield), and he advanced the ball weaving through defenders creating just enough space to launch a deep 3 at the buzzer. He nailed it, and sent the game into double overtime at 89 apiece. Unfortunately, the Bears season came to an end with a heart-wrenching 107-104 loss; however, this game left absolutely no room for disappointment. This was the best our Bears had played all season. We showed our championship mettle, playing with resilience, fortitude, tenacity, and heart! As difficult as it will be to say goodbye to 10 remarkable young men, we could not be more happy that they all finished their careers as Bears under the tutelage of Coach Z.

Our Girls’ Basketball season was fraught with unexpected change and loss. The roster by the end of the season was barely recognizable from the roster we had assembled at the beginning of the year. Lesser teams may have given up before the season even got started, but that would never be true for Coach Palmer and her Bears. They played the entire season with an emaciated Varsity roster, at times only fielding one or two subs. As challenging as that proved to be, our team played with unparalleled resilience and determination. The girls never gave up on themselves. They practiced every day with ferocity and dedication. The seniors provided tremendous leadership and prowess; meanwhile, their younger teammates stepped up into major contributing roles. Every member of the team embraced the larger role as assigned to them, never succumbing to the weight of the unexpected burdens thrown at them. The Bears secured four fantastic victories over league opponents (Gahr and Paramount). The girls also boasted their best finish to date in the Arizona Nike Tournament of Champions. These are victories in which our team should take incredible pride because they had to earn each of those wins in spite of the tremendous adversities and losses they faced. This was arguably one of their gutsiest seasons on record, and it offers great hope for the future of such a steadfast and resilient program.

Boys’ Soccer saw a fantastic resurgence this year. After failing to qualify for the playoffs in the 2018-2019 season, the Bears came back with a vengeance. Under the guidance of Coach Pena and the return of Coach Soto, the Bears returned to their championship roots. The team has a knack for peaking at the right time. For our Bears, the second half of league proved to be the exact time when the team really hit their stride. Our Bears secured key wins over Gahr (6-0) and Paramount (3-1) in order to clinch 3rd place in league and return to the playoffs. The Bears overwhelmed their first round opponent, West (Torrance, CA), earning a 3-1 victory.  When the offense was clicking, it was truly poetic–quick touches and beautiful ball movement leading to a dominant offensive performance. The Bears advanced to the 2nd round of playoffs, where they faced a formidable opponent in Arlington. For most of the game, the momentum seemed to be with Arlington as they got out to an early 1-0 lead; however, our Bears showed incredible fight and dauntless courage. In the final 3 minutes of the game, there was a palpable shift in the dynamic, and our Bears started pounding. We secured the tying goal with roughly :30 remaining in stoppage time, sending the game into golden goal overtime. Again, the Bears were controlling possession and keeping the ball on the offensive half of the field. After multiple shots on goal, there was one good break for Arlington and they capitalized on it. Unfortunately, the season came to an end, but it was a season of which we could be truly proud. The success of the 2019-2020 team at all three levels gives the Bears a lot of excitement and anticipation as they embark on their preparations for next year.

Dominance at its finest proved to be the theme for our Girls’ Soccer team as they secured their 6th consecutive San Gabriel Valley League Championship. The Bears went 9-0-1 in league, totaling 47 goals scored and only 2 goals allowed. As aforementioned, dominance! When a team secures 6 titles in a row, it might be easy to lose sight of just what an incredible feat that is! It is easy to take for granted the hard work, discipline, commitment, and passion that goes into defending the championship year in and year out. That is exactly the standard to which our Bears and their fearless leaders hold themselves. They work hard every day, they remain humble and respectful, they take care of business on the playing field and in the classroom, and they carry themselves with integrity and honor through it all. They epitomize exactly what any Athletic Department would be proud to have representing as student-athletes. The girls play with a fearlessness and aggression that belies their size. Although typically the smallest team on the field, they play big beyond measure. Their heart was put on display when they faced Redlands East Valley in the 1st round of the playoffs, a team to whom they had suffered a loss in an early-season tournament game. It was a tight contest throughout, ending in a 1-1 tie at the end of both regulation and overtime. The game went into penalty kicks, at which point our 4 shooters (Amanda Macedo, Carisia Raygoza, Jazlyn Arevalo, and Drew Gutierrez) nailed their shots; meanwhile, our goalie (Jenna Ruano) came up with two critical saves to help secure the 4-1 PK victory! Our Bears approached every moment of that game with grit and composure, a steadfast belief in themselves that never wavered even in the most tense minutes. Unfortunately, the Bears suffered a devastating loss in the 2nd round of playoffs, but the season can still be encapsulated as a tremendous success. Not only do the Bears have a brilliant future ahead, but 6 seniors (and counting) have signed their National Letters of Intent to continue their athletic and academic pursuits at the next level.

Akin to our Girls’ Basketball team, our Girls’ Water Polo team faced a number of changes going into the 2019-2020 season. The starting lineup was composed of 2 pivotal senior returners and a number of underclassmen who were relatively new to the sport. Although it created a challenging season, the Bears showed an incredible amount of development and enhancement. A few freshmen and sophomores adopted key roles in order to fulfill the needs left by a number of critical losses. The Bears never gave up on themselves, and came away with a few solid victories over league foes. As counter-intuitive as it may sound, the true testament of this team’s fortitude was displayed in their frustration. The girls were disgruntled by their struggles throughout the season. This shows that they will not become complacent; they will not settle for mediocrity. The Girls’ Water Polo team has perennially been a staple of success, and this team is determined to earn its restoration to a place of league championships and playoff berths. If the Bears retain this talented group of underclassmen, then they will undoubtedly make a splash in the next couple of seasons.

The Boys’ Wrestling team boasted a thrilling season in which the Bears vied for a league championship. The Bears secured a dominant victory over the crosstown rival Vikings, helping redeem a heartbreaking loss from the 2018-2019 season in which Warren fell on criteria. Caleb McIntyre earned a pin to give the Bears a 33-18 lead. With only a few weight classes remaining, Warren knew we had secured the win. Unfortunately, the Bears fell to Paramount by an extremely narrow margin after a tightly contested battle through every weight class. A well-coached group of talented young men gave everything they could and came up just short, but the pride exudes from watching our Bears fight with championship heart and resolve. The Bears went on to a competitive post-season run in which both Andrew Lopez and Troy Garza finished third in CIF, en route to qualifying for the Masters.  At Masters, both Garza and Lopez fought incredibly hard in the hopes of earning a State Championship berth. Lopez came up just short, finishing in the top 12 but struggling to snag one of the 8 spots slotted for State qualifiers. The Boys’ Wrestling team proudly touts a number of talented young Bears who will prove to be highly competitive in the coming years.

Finally, our Girls’ Wrestling team proved to be the perfect blend of an incredibly talented senior group and an ambitious, tenacious underclassmen group. The team was led by two powerhouse seniors in Siouxsie Luna and Bethany Aviles. Both girls claimed league championship honors en route to an even more impressive post-season run. Luna claimed Warren’s first ever girls’ wrestling CIF Championship at her weight class, the culminating achievement on what has truly been an illustrious career beginning in the inaugural season of the Girls’ Wrestling program. Meanwhile, Aviles captured a State Championship berth by finishing 7th at Masters. Aviles joins Coralia Montalvo (Class of 2019) as the second consecutive Bear to punch her ticket to the State Championships. These seniors modeled excellence, dedication, perseverance, and strength to a group of eager underclassmen who proved to be incredibly talented, driven, and ambitious. With such a powerful group of returners, the expectations are skyrocketing for the next few years of Warren wrestling.

That’s it for the winter wrap. Now it’s time to serve up an ace for the spring sports season!